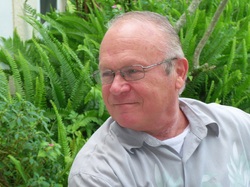 Born and raised in New Orleans, Louisiana, Mike Arsuaga completed careers in the United States Navy Submarine Force and the Transportation Security Administration. Although his careers have taken him all over the world, he now lives in Orlando, Florida with wife and Editor in Chief Cynthia, daughter Jennifer, granddaughter Larrna and partner in crime Fitzy, a Silky terrier.

Mike’s extensive travels took him throughout the United States, Canada, Europe, the Caribbean, and the Middle East which provide accurate and vivid settings for all his stories. Although Mars figures prominently in at least one installment of The Progeny of Evolution series, he hasn’t been there yet. The trip is prominent on his “bucket” list.

The First Servant, from I Heart Book Publishing, LLC is his latest release and first foray into the Steampunk genre. In this Science Fiction Romantic thriller involves two civilizations reach out to each other across time. For one, the past becomes the future. Jenny-Leigh 8, also science fiction, is the story of a recreational android who steps up during a national crisis to show she's more than another pretty face.

The Progeny of Evolution series, seven books soon to be published by I Heart Book Publishing, tell of the deep love between two special beings as they shepherd lycans and vampires, The Others, in their ascent from Creation’s vilest expression toward becoming the noblest.

Mike and Cynthia have co-written two books Top Dog is published by I Heart Book Publishing. The sequel, Love and Death in the Big Easy, releases in July 2015. The series chronicles the story of a special shape shifter. Instead of transforming into a large fierce animal, he becomes an eight pound Yorkshire terrier. While not much good in a scrap, he can go places the big guys can’t and he’s irresistible to women. Currently, they are in the process of adapting the first book into a screenplay for motion pictures or a television series.

© 2010 - 2015. All rights reserved and no exceptions. All personal works on this site are the exclusive property of Mike Arsuaga.  Work may not be transmitted via the internet, nor reproduced in any other way, without prior written consent.