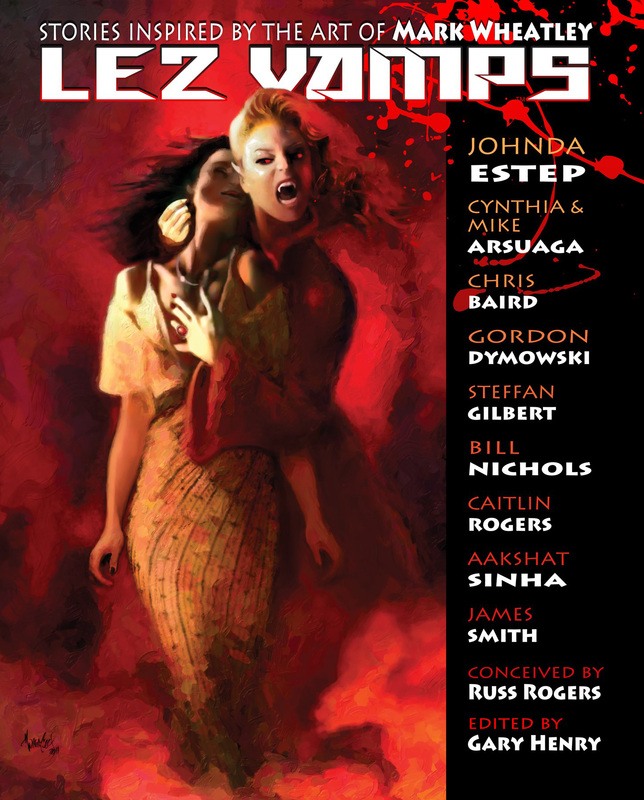 Here's a little snippet of our short story, Boundary Dispute.

I waited in the dark for my prey hidden by the cover of the forest.

Humans always passed this way, mostly young males, impatient to partake of the sweet offerings in the bayou honky-tonk on the main road leading into town. The lush canopy of live oak and devil vine filtered the light to nothing and made the unsuspecting revelers easy targets for the bloodlust of a vampire with dead-on night vision. Seduction, sex and ultimately their life’s elixir made for a night of pleasure, mine as well as theirs.

Casting a silvery aura, a full moon lit the path and silent meadow surrounding the trees. Enough of a pallid glow washed the scene to make out any figures crossing through the hunting ground. For hours, I stared relentlessly into the distance, because time means naught to a vampire on the hunt. The heat of expectation sent tingles travelling over my skin to every extremity.

A ripple in the overall pattern of stillness caught my attention. The subtle sound of soft foot upon saturated loam and fallen leaves could only be heard by a preternatural creature with heightened senses. Every passing minute, stirred the charge of expectation in the air and an insane itch to bite. A form emerged into the open. Not many females hazarded this path. As an equal opportunity predator, I decided another of my gender would do.

The target walked fast bent against the chilly breeze, with long, deliberate strides. As she approached, a willowy woman with dark hair flowing behind like an ebony pennon materialized from the miasma. Absolutely black in moonlight, her locks sucked up all the light. She wore a body-hugging dress, accentuating every curve of a lithe young frame. The wind molded the flimsy fabric to her flesh, clearly no protection from the chill. The cold didn’t faze me, but a human would find the evening weather intolerable without some type of protection.

I watched with curiosity. Her shadowy figure moved sensuously as her hands twirled the silky mane cascading over her covered shoulders. Only a few yards away and still in the open, I noted brief detail of the face, young and smooth. A delicate form, one of such innocent beauty I’d not seen in this territory for years. My heart skipped a beat and I sucked in a deep breath. She seemed familiar. For a moment, a memory pushed to the surface. I brushed it aside in anticipation of the impending attack.


© 2010 - 2015. All rights reserved and no exceptions. All personal works on this site are the exclusive property of Mike Arsuaga.  Work may not be transmitted via the internet, nor reproduced in any other way, without prior written consent.